DISCLOSURE: All Zoonosis webpages are under construction temporarily until all content issues are corrected. 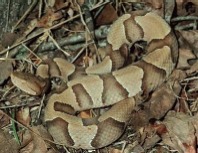 There are two types of venomous snakes found in Texas. First, pit vipers are the most common type of venomous snakes in Texas and include the copperhead, cottonmouth and rattlesnake. Pit vipers get their name from the infrared radiation receptors located in a "pit" on each side of the snake's face. Additionally, pit viper pupils are vertically elliptical and they have a single row of scales located on the underside of their tail.

The second type of venomous snake found in Texas is the coral snake. Coral snakes are members of a group of snakes called Elapids that are characterized by having a short, permanently erect fang located along each side of the upper-jaw. However, the coral snake does not have to "chew" its victim to inflict a painfully venomous bite. The Texas Coral Snake is the only member of the Elapids that is found in Texas and can easily be identified by the red, yellow and black color bands along the snake's body. The Texas Coral Snake is the only snake in Texas with touching red and yellow bands.

Symptoms of Envenomization by Snakes

There are many biological and environmental factors that determine the quantity and toxicity of an individuals snake's venom. People also react differently (immunologically) to snake venom. It is difficult to identify a set of standard symptoms for snake bite victims because of these variations. Listed below are some symptoms that many victims of snake bites share, but remember that not every victim will have all of these symptoms. 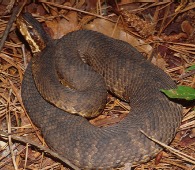 If someone has been bitten by a venomous snake, it is important to seek medical attention promptly. Call 9-1-1 or the Texas Poison Center Network at 1-800-222-1222 for information about which medical centers in your area have the appropriate antivenom. If possible call ahead to the medical center so the antivenom can be ready when the victim arrives. It is also important to identify the kind of snake that bit the victim. Even taking a dead snake with you to the medical center is appropriate if it can be done without further risk or injury. Extreme caution should be used when bringing in a snake because even though the snake may be dead, its reflexes may still allow the snake to bite.

What to do for Snake Bite Victims

What NOT to do for Snake Bite Victims