Risk factors among people diagnosed with TB have remained consistent from 2015 to 2019. Approximately a third of all cases, reported more than one risk factor for tuberculosis.

Figure 4. Proportion of Substance Abuse* Among TB Cases in Texas, 2019 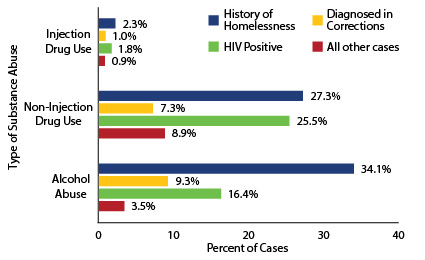 1. Centers for Disease Control and Prevention (CDC). Reported Tuberculosis in the United States, 2019. Atlanta, GA: US Department of Health and Human Services, CDC; 2020.